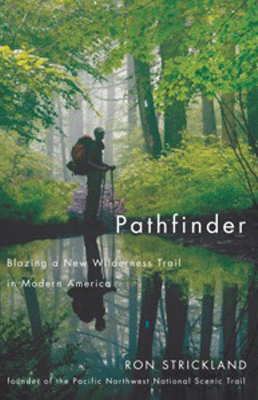 "Witty and evocative, Pathfinder is a conversation that our society desperately needs. Read it - and go hiking."

“What makes Ron's 215-page paperback book so enjoyable to curl up with is the fact that it was written in hindsight, with the benefit of sage wisdom, deep reflection, and universal truths that capture the essence of what long-distance hiking is all about.  His writing style is also so captivating, you'll wish the journey between the covers never ends.  Every word has been seemingly mulled over during that greatest of all contemplative pastimes - walking - and he has spent a lifetime walking.”

"I can’t recommend Strickland’s memoir enough. If you have interest in learning what it takes to start a new National Scenic Trail, be sure to pick up a copy."

"Instead of rehashing old politics, Strickland just takes us on the trail. He introduces us to its characters, to moonshine peddlers and gold prospectors, and reveals its lore through stories of trail magic, and the lost art of net fishing. He muses on why it is that people hike and invites us to share in his personal epiphanies. Five of Strickland’s previous seven published books are oral histories, and the best parts of Pathfinder are where Strickland does what he does best: collect stories. Over three decades of hiking, Strickland has interviewed the best of the characters of the Northwest, and in Pathfinder, we get to see them in their natural setting, from Bill Tilly, the back-country miner, to Sheila Pearson, an overweight middle-aged woman who thru-hiked the PCT and lost 134 pounds in the process."

"Strickland describes his book as a `backcountry stew where the hiker chef has thrown in as many tasty ingredients as possible, not necessarily in any particular order.' That’s an apt description for a text that travels some diverse topical terrain: part memoir; part historical and cultural narrative; and of course plenty of hiking history, trail musings and accounts of the politics involved with such a huge project."

Derrick Knowles, Out There Monthly Magazine, May 2012

"It's much more than the story of one trail as [Strickland] spins tales of his mentors and heroes... and dedicated souls who similarly persisted to bring new pathways into being."

“In Pathfinder, Strickland reminds us that a hiking trail is first and foremost a creation of community, encapsulating not only the landscape through which it cuts but also the people who tread its paths. `There is a temptation to understand wilderness only in the absence of humans. I prefer a more complete view that treasures the backcountry’s legends and tales. Such stories sit lightly on the land and add immeasurably to our enjoyment,’ he writes. The stories of the PNT are indeed enjoyable and lighthearted, and Strickland guides us along the trail with grace and humor.”

Megan Kimble, “The Joy of Walking: Stories from an Outlaw Trail”, Terrain.org

“Pathfinder is funny, poignant and unsparing in candor.... Pathfinder portrays a kaleidoscope view of a modern trailblazer’s life.”

“It’s a thoroughly entertaining read which can be enjoyed by anyone who loves backpacking and wild places, even if they’ve never been near the Pacific Northwest.... Overall this is one of the most enjoyable outdoor books I’ve read in many years. It really captures the experience and camaraderie of the outdoors and Ron’s love and devotion for the wilderness and hiking. I highly recommend it.”

In the early 1970s, a young, novice hiker had an audacious idea.  Ron Strickland decided to create a 1,200-mile footpath across three national parks and seven national forests to link Glacier National Park's alpine meadows with Olympic National Park's wilderness coast.  Enchanted by all that magnificent backcountry, he enlisted volunteers, lobbied landowners, and dug dirt.  Four decades later in 2009, President Obama made the Pacific Northwest National Scenic Trail an official part of our national heritage.  In this book Ron reveals how he and the volunteers bucked both brush and bureaucracy to establish one of the world's most beautiful trails.

Ron Strickland is a master storyteller whose seven previous oral histories and guidebooks showcase some of our most fascinating regions and people.  In Pathfinder he intersperses colorful portraits of memorable trail characters with insider’s tips about favorite hikes.  You will find tales of a former Hollywood talent scout, a long-ago murder, and a world-class eccentric guidebook writer who likes to keep everyone off his trails.

Ron Strickland is a Pied Piper of hiking whose infectious enthusiasm for trails, gear, and fun has influenced many walkers.  With new trails sprouting up all across the country, his message about the coming Renaissance of hiking is, "The adventure is just beginning.”

Dr. Strickland is one of only two living founders of America’s national scenic trails.  He is the recipient of numerous conservation honors, including the 2010 L.L. Bean Outdoor Heroes Award.